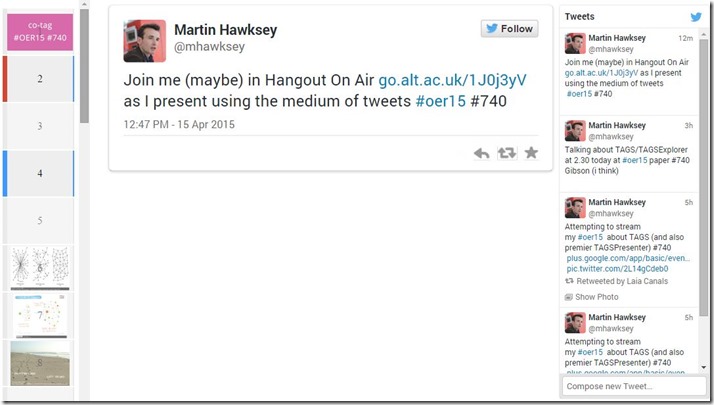 Later today (2.30pmUTC) I’ll be presenting at #oer15 about Twitter in open education (tune in here). As I wanted to highlight the network effect of Twitter I wanted to engage not just the room, but leave ‘footprints’ as for others to follow. I know people like Alex Couros and Alan Levine have done cool stuff live tweeting from Keynote. I’ve dabbled with doing stuff with Microsoft PowerPoint but was never fully satisfied. Given Twitter now supports a number of embedded media formats I thought rather than trying to fit Twitter into another presentation tool, to turn my live tweets into my slides.

And so TAGSPresenter is born! Using a Google Sheet as an editor, Google Drive to host images and a bit of Google Apps Script to glue it together I’ve got my own Twitter based presentation tool. I don’t have time to write about how it was technically achieved but if you want to peak under the hood of the hack here are my ‘slides’ which are published here.

This work is licensed under a Creative Commons Attribution 4.0 International License, with the exception of images and other noted works.

Tweets about "#oer15 OR from:oerconf"

There are no users currently online

Skip to toolbar
This website uses cookies that are essential to make our site work and others to improve your experience of the site. For more information please see our cookies policy No, I want to find out more